There are 378197 simple Perfect Squared squares of order 33. The complete enumeration of this order was produced by Jim Williams in June 2014.

The exploration and enumeration of the SPSSs of order 33. 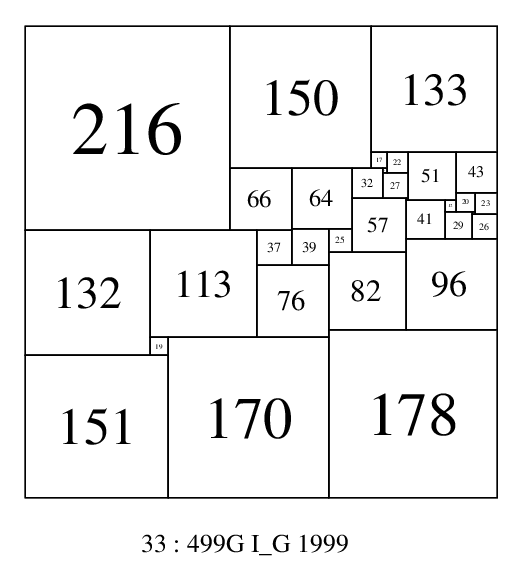 Prior to 2010, this order of squared squares was almost totally unexplored. Ian Gambini had contributed one order 33 SPSS in his 1999 thesis (see figure 33:499G).

Stephen Johnson had explored SPSSs and CPSSs in the orders 30 to 36, with a new semi-random search method using both geometrical and network graph methods. By 2011 he had found 491 SPSS, and 62 CPSS. Further discoveries were made in 2013. In order 33 Stephen Johnson found 36 SPSSs. 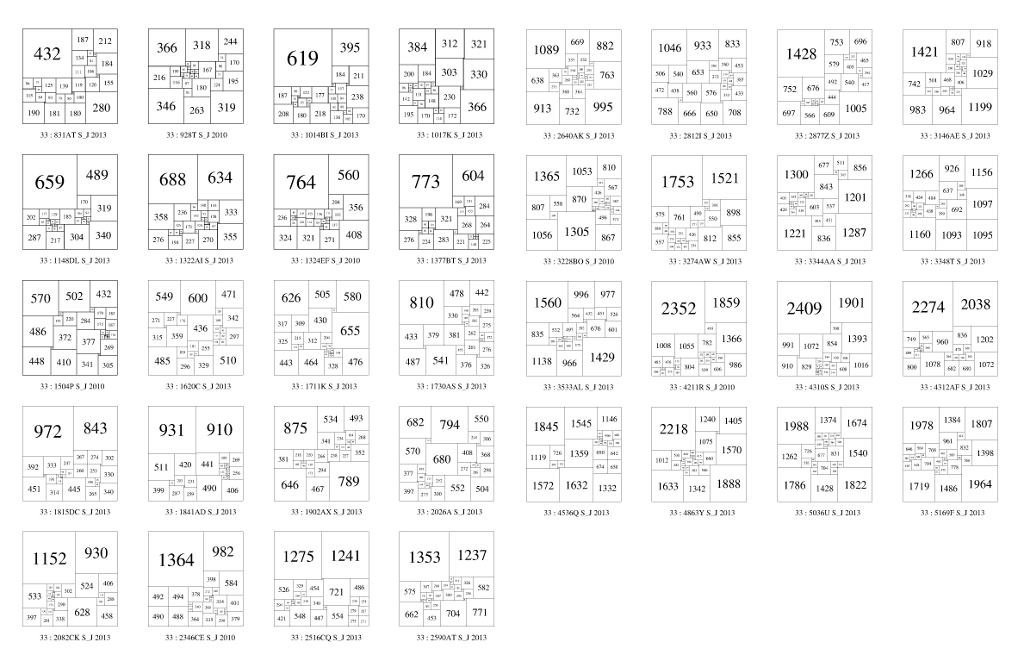 A selection of Stephen Johnson's SPSSs of order 33

In January 2013 Jim Williams created squared squares of orders 30s and 40s by combining smaller electrical graphs at exactly 3 nodes and filtering out non-solutions. He found an incomplete 142,879 SPSSs in order 33.

Later in the same year, Milla and Anderson completed orders 31 and 32 and found a number of discoveries in higher orders, including 13,715 new discoveries in order 33 SPSSs.

In 2014, with revised and rewritten software running for 2 weeks, Jim Williams enumerated all of order 33 SPSSs, finding a complete total of 378,197 including 221,566 new discoveries.

Some Facts and Figures on the SPSSs of Order 33

The number of SPSSs in order 33

Smallest and Largest SPSSs of order 33

The smallest and largest SPSSs of order 33 are, respectively; 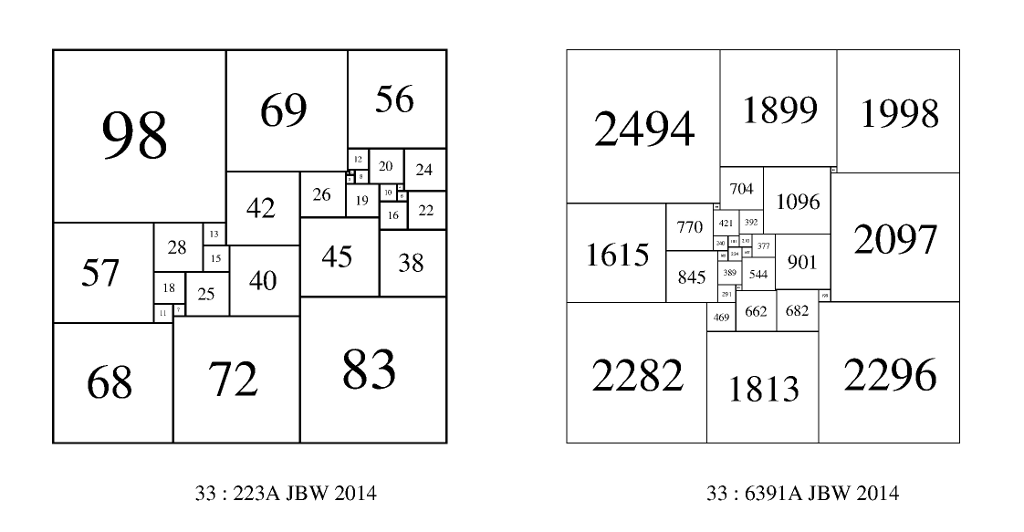 The distribution of SPSS sizes in order 33 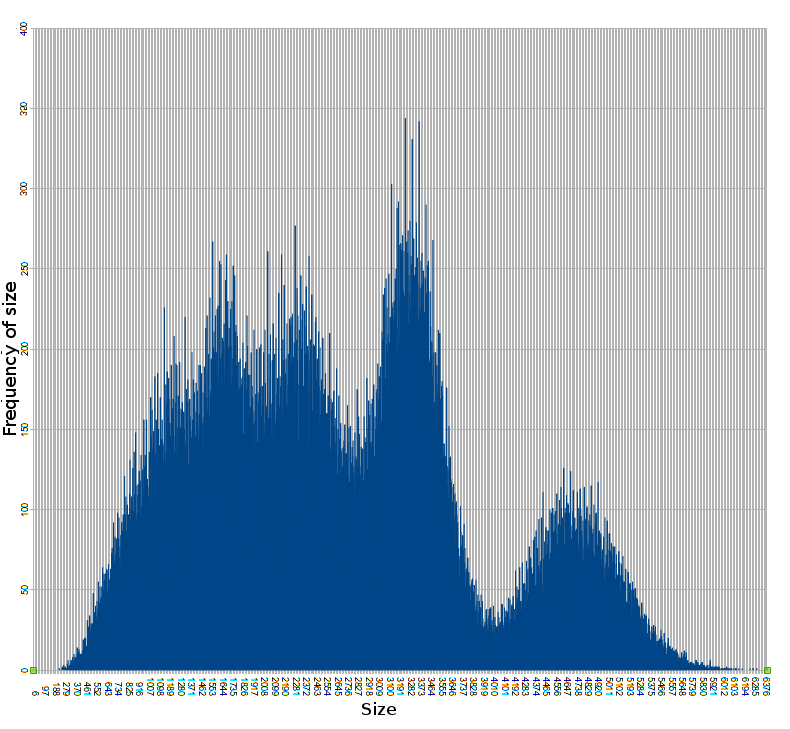 The peaks and troughs invite explanation and closer inspection of the data.

Measures of central location of size in the SPSSs of order 33.

The median, the middle size in a lineup from smallest to largest, is 2546.

This kind of distribution shape of sizes is common to all SPSS orders, it appears more detailed, and the sizes scale up as the order increases.

The distribution of element sizes in order 33 SPSSs

A count of element sizes gives a decay curve. Closer inspection reveals higher frequencies for element sizes which are multiples of 4. 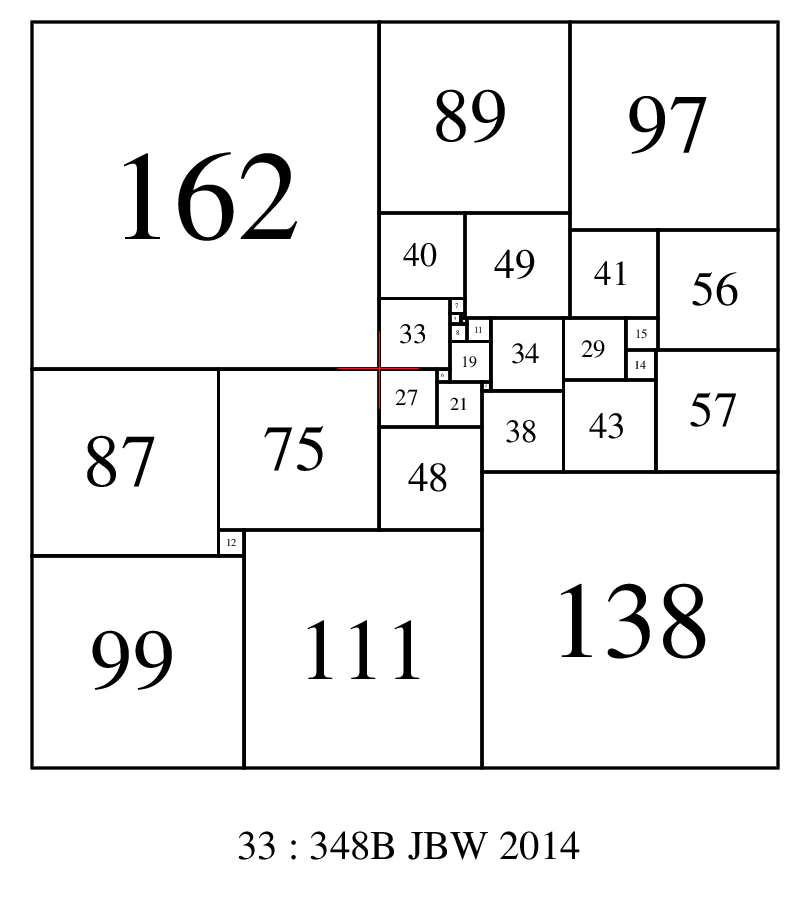 Largest element not in a corner in order 33 SPSSs 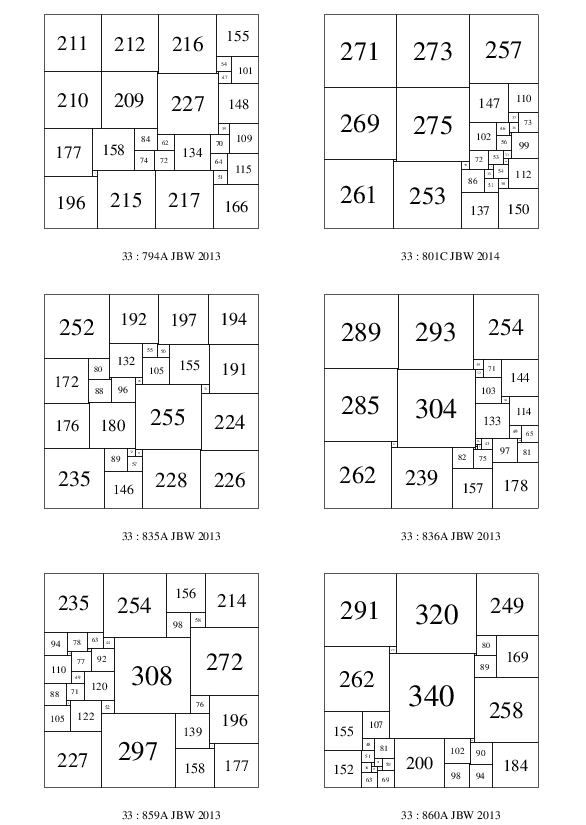 Most SPSSs have elements which vary greatly in size from the smallest to the largest element. If this variation in element sizes can be restricted then all elements can be clearly seen and we can call such SPSSs 'nice'. A measure of 'niceness' is the ratio of size of the largest element to the size of the smallest element. In May 2014, Jim Williams found an order 33 SPSS with a largest/smallest element ratio of 549/70 = 7.8429, making this the 'nicest' known perfect squared square. 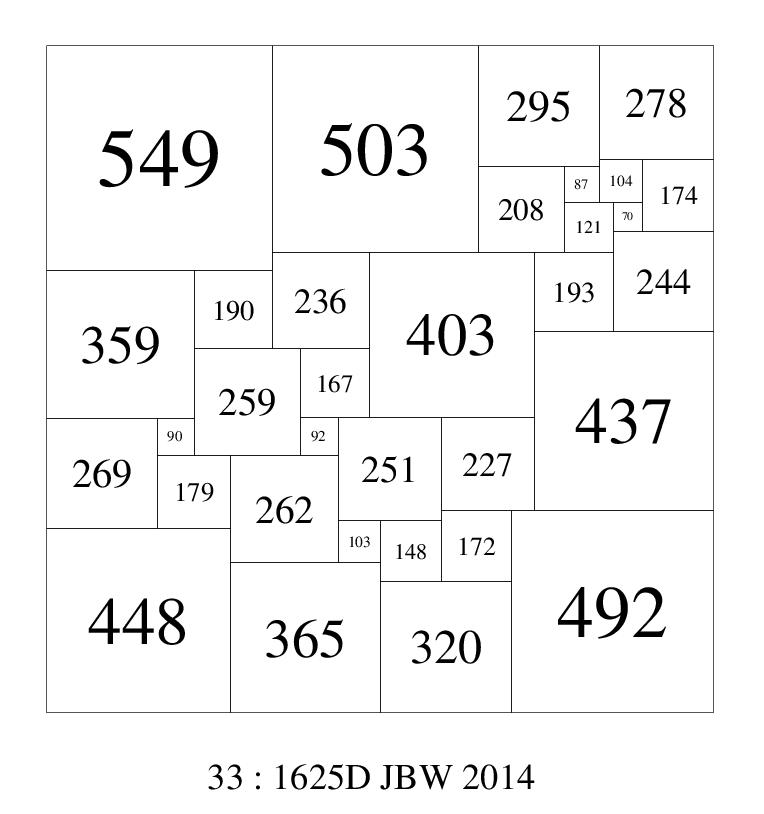