In mathematics, the real projective plane is an example of a compact non-orientable two-dimensional manifold, that is, a one-sided surface. It cannot be embedded in standard three-dimensional space without intersecting itself. It has basic applications to geometry, since the common construction of the real projective plane is as the space of lines in R3 passing through the origin.

Renaissance artists, in developing the techniques of drawing in perspective, laid the groundwork for this mathematical topic. 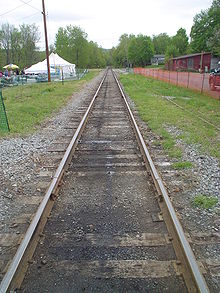 Parallel lines intersect
in the vanishing point at infinity. 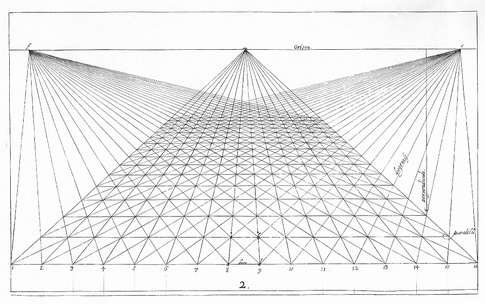 Perspective with vanishing points at the line at infinity.

Since the Möbius strip, in turn, can be constructed from a square by gluing two of its sides together, the real projective plane can thus be represented as a unit square (that is, [0,1] × [0,1] ) with its sides identified by the following equivalence relations:.

as in the diagram below.

The fundamental polygon
of the projective plane.

In both cases the sizes of the elements are commensurate with each other and can be expressed as integers divided by any common factor. If the sizes of the elements dissecting a projective plane are all distinct, (no two the same size), then we call the dissection perfect. The number of elements in the dissection is called the order. We call a tiling faultfree if has no fault line, which is what we call a glued edge that does not intersect any tiles. We use the abbreviation FPSPP for Faultfree Perfect Squared Projective Plane.

All of these projective plane dissections have been discovered recently by Geoffrey Morley and assembled by him into this collection. Geoffrey has also authored some postscript programming code which is the basis for the dissection graphics on this page. Stuart Anderson has also contributed to the programming code. This is currently an active area of research, all known updates are included here as of 26th March 2014.

Known FPSPPs (all in the attached files excluding any of order>5 with sloping tile sides):

The FPSPPs of orders 6 and 7 on the website do not include any with sloping tile sides, of which there must be hundreds.

Orders 3, 4 and 5 have instances of two FPSPPs, one with sloping tile sides and the other without, whose elements are the same. The situation is unknown for higher orders.